“Education Week” Summer 1989 – 30 Years Ago! – “St. Paul School District Touting Saturn School of Tomorrow As Model for Technology in Education” – It Was. Still Is!

On occasion, RE@LBlog brings our readers a “K12 Blast from the Past.”

“Those who do not learn from history are doomed to repeat it.”

We need to learn from our past, both what has worked and what still needs our working on…

30 years ago this fall, back in 1989, RE@L Blogmeister Tom King, along with many committed colleagues, were readying to open the Saturn School of Tomorrow. Students, parents and staff all were ready with promising, new ways for students to learn, while alert to the many mistakes from the history of previous K12 reform.

Before the launch of Saturn School that fall in 1989, the online publication, Education Week, was there to get  our unique startup stories. Here’s what they found:

From the archives of the publication “Education Week“- August, 1989

“The Saturn School of Tomorrow!”

“Officials in St. Paul are poised [August, 1989] to open a new, technology-based magnet school where students and their parents will be able, with the aid of a sophisticated computer-software program, to map out their own educational goals and track progress toward meeting them. 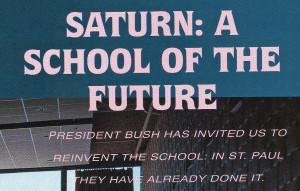 When the Saturn School of Tomorrow opens in September 1989, officials say it will represent not only the cutting edge of technological education but also the frontiers of school reform. (Click on graphic to the left for additional information).

The 4th, 5th, and 6th graders attending the school will be grouped according to their skills development, rather than their grade levels, and will complete a longer school year than other St. Paul students. Their teachers will receive salaries of $55,000 a year or more–$20,000 above the city’s average–and will have greater on-site responsibilities.

Supporters call the Saturn School an experiment in restructuring that weaves a technological strand into “learning for tomorrow.” It is a cooperative venture linking the St. Paul public schools, the local teachers’ union, higher-education institutions , and private businesses. Unlike other schools, where computers may be employed as an adjunct to instruction, students at the Saturn School will spend at least one-third of their day on computers and other equipment. 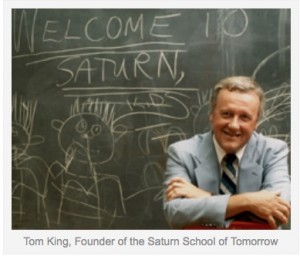 “Technology is absolutely essential” to the success of the Saturn School experiment, said D. Thomas King, the project’s director. “But we’re really building it into the learning process. We want to make technology a transparent tool.” 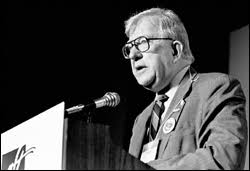 The inspiration for the project came from a speech given by Albert Shanker, president of the American Federation of Teachers (AFT). In it, Mr. Shanker urged schools to adopt new educational models that emulate the General Motors Corporation’s Saturn automobile plants, where workers and managers have collaborated to redesign the workplace.

“What we really had to do, in effect, is design a new process,” said Mr. King.

The project has the support of the St. Paul Federation of Teachers, an AFT affiliate. The union will play a major role in selecting the “lead” and “associate” teachers who will staff and manage the school. “I knew it would be a way to show what technology could do in restructuring,” said Gladys Westin, president of the teachers’ union. “I also knew that it would be an opportunity for us to integrate technology into the curriculum, yet not be a ‘technology school,’ per se.” 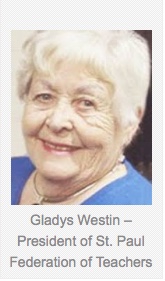 The teachers selected for Saturn will sign a 12-month contract, but all will earn at least $55,000, substantially more than the $35,000 average teacher’s pay in the St. Paul system. We negotiated not only for the dollars and for the time,” said Ms. Westin, “but for the responsibilities. I wanted to give our profession an opportunity to be leaders.”

A Consortium Approach: To meet the project’s $1.8-million start-up cost, the district adopted a “consortium approach” in which “partners” from the fields of higher education, educational research, and business offer their expertise in exchange for an opportunity to conduct field research.

The College of St. Thomas, a local teacher-training facility, will be using the school to help train some of its student-teachers, for example. “We’re going to develop a teaching model that is similar to a teaching hospital,” Mr. King said.

The Minnesota Educational Computing Corporation [MECC] is making available its software and providing training in exchange for the knowledge it can glean from its product’s use in the classroom. 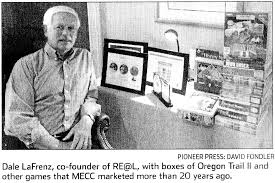 “There’s no direct return” on the investment, said Dale LaFrenz, the company’s president. “We’d like to think that we’ll get a good return in [product] development.” 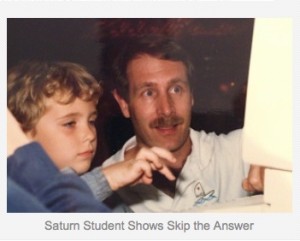 Skip Karbo, a spokesman for Apple Computer Inc. [see his photo to the right], said his company has donated $85,000 worth of Apple II computers, printers, and modems to the project.

[Thanks to the efforts of Apple employee, Skip Karbo] Apple Inc is negotiating with the district to provide even more in exchange for access to the data collected as students and teachers develop proficiency with the equipment.

Backers of the project expect donations of more than $540,000 in equipment and personnel, including more than $400,000 worth of equipment from the Minnesota-based Control Data Corporation and $10,000 in videodisk equipment from Pioneer Communications of America Inc.

Central to the Saturn School concept, Mr. King said, is the use of an “expert system,” a complex software program that simulates the decision-making skills of teachers to guide students’ development.

Personal Learning Programs: The first group of Saturn students, selected early this year, will soon begin to use the systems to develop their “Personal Learning Programs” (PLP) on the computer. The PLP’s diagnose students’ learning needs and prescribe the right curriculum and remediation to help them meet the educational goals they and their parents set in consultation with the school’s teachers. 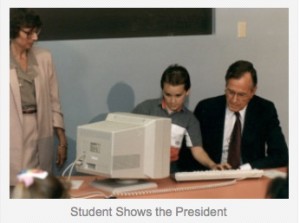 “The system is focused on the student,” said Marilyn A. Martin, an education consultant with PeakSolutions, a Minneapolis-based software company. [PeakSolutions was a local think-tank, developing an online Personal Learning Plan for each student].” It gives the student much more flexibility to choose his or her goals and select resources to accomplish those goals.” Teachers can, however, modify or reject students’ personal-learning programs.

First-year enrollment at the downtown facility will be 150. “Grades are going to be relatively meaningless to us,” said Mr. King, “because we’re grouping students according to [student needs] and ability level.”

Human Interaction: Students will attend the school for up to 44 weeks and follow a curriculum that, in addition to conventional subjects, also will include environmental education, and courses on ethics and morality. “I think the curriculum has to be an interdisciplinary one,” Mr. King said.

In addition to the time spent in the computer room, students will spend another third of their day in “cooperative learning situations” and the balance of the time in teacher-led discussions or on field trips to nearby St. Paul institutions.

Mr. King said that the human interaction between students and teachers is as vital to the program’s success as the computers.“We don’t mean to abandon them to the machine,” he said.

He added, “We see Saturn School as High-Teach, High-Tech and High-Touch with our entire learning environment.” 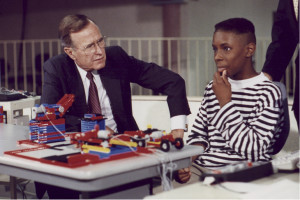 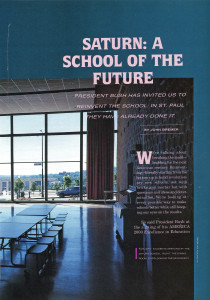 “Technology back in 1989 was still an emerging set of tools, and ones that our Saturn students  learned to use so well they were able to teach a President how to learn. Now we need future pioneers of K12 school reform. We need a K12 revolution.”

President George H. W. Bush came to visit Saturn kids and their new school in 1991, praising the staff, students, parents and local community for its innovation. We educators are still learning from what worked and what needed more work.

RE@L readers can view a brief video made by Saturn students doing a “show and tell” about their innovative school. Just click on the graphic to the left:

“There’s no place like school!” those students said as their story ended. That’s music to our collective K12 Edtech ears….more ways to more successful learning for all are always needed! Let’s work together to find more ways.

RE@L adds: Let’s learn from the past. Saturn School Created Tips for Tomorrow’s Learning Today! RE@L’s new EdTech tools will help learners and teachers everywhere learn from our past and add to our future.