RE@L is honored to present this University of Minnesota, College of Education and Human Development “Alumni Profile” Spring 2020 recognition of our RE@L Chairman, Dale LaFrenz.

Proud we are! Here’s Dale’s Profile from the U of M:

Dale And His RE@L Team Are “Still On The Trail!” 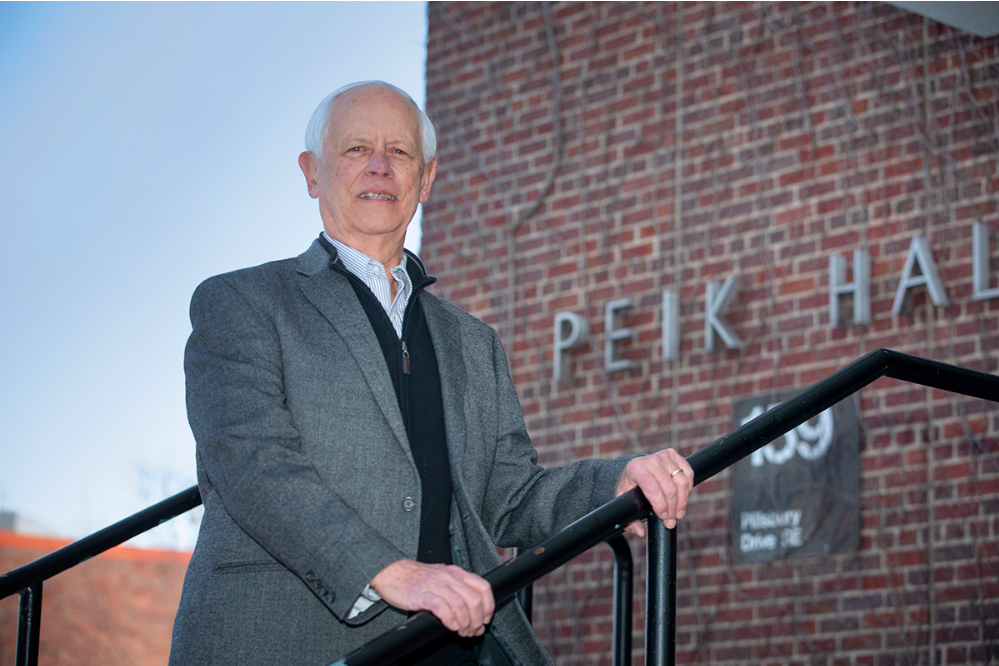 THROUGHOUT HIS CAREER, Dale LaFrenz has been a pathfinder. And he’s quick to add that he hasn’t traveled alone: “There were a lot of people involved. We started a huge industry that grew out of our efforts, and it all came from 330 Peik Hall.”

For LaFrenz, it’s been a long, long trail. And it’s a road he still rides.

It began in 1963, when LaFrenz came to the University of Minnesota to earn a master’s degree in education after a couple of years teaching in Faribault. He soon found himself talking regularly with other instructors in the College of Education about emerging technology. “We decided that there must be something to this computer thing that’s going to involve kids, teaching, and learning,” LaFrenz recalls.

From those conversations, LaFrenz and others founded nonprofit entities that allowed students—first at the University, later at school districts statewide—to “share time” (via phone lines) on mainframes elsewhere in the country that offered time-sharing. In 1973, LaFrenz helped establish the Minnesota

Educational Computing Consortium (MECC), a statewide educational-computing telecommunications system. In addition, MECC built a library of education-related software. In the mid-1970s, it hired the inventors of “Oregon Trail,” which would lead MECC to become the pioneer in a boomtown of an industry. (Meanwhile, LaFrenz continued his studies, and was awarded a PhD in 1978.)

its own educational computing operation using its PLATO computer system.

Meanwhile, MECC continued to grow, thanks primarily to “Oregon Trail.” LaFrenz returned there in 1985, helping to transform what had been a consortium into a private company, and then a publicly traded one. In 1995, MECC was acquired and “rolled up” along with dozens of other companies in the booming educational computing space. “Oregon Trail” ended up being owned by Mattel, which dropped it in the late 1990s after the toymaker found itself mired in debt.

Once again, LaFrenz moved on into new territory, though remaining in the same industry. With the rise of the internet, he saw the opportunity for online educational computing, co-founding a company called wwwrrr.com. (One guess what the three “R’s” stood for.) It turned out to be a little ahead of its time, lasting for three years before falling victim to the dot-com bust.

LaFrenz’s new venture, RE@L, in many respects follows the same path as his dot-com, using the internet to deliver educational materials. In February, RE@L launched its first product, designed to teach kids about the dangers of vaping. The new company also has 12 STEM products in the pipeline.

While the K-12 educational-computing market “has grown in terms of purchasing,” LaFrenz says that schools are putting too much emphasis on acquiring hardware. “That’s not the way it works,” he adds. “What does need to occur is have people like us who can integrate the hardware with the teaching and learning process.” That, he believes, will allow teachers to use technology more effectively.

“We’re looking at what I believe is a systemic change,” LaFrenz says. K-12 schools have “really ingrained techniques, tactics, philosophies, and so forth. We have found a way to get the current technology harnessed.”

LaFrenz acknowledges that “we have a huge hill to climb.

But we also have a huge opportunity.”

This recognition of  RE@L Chairman Dale shows our readers why RE@L’s new STEM LearningProducts™ will revolutionize K12 learning, just as “Oregon Trail” did 50 years ago!

Congratulations, Dale! “Ever Onward and Upward!”