RE@L’s “1Up On Vaping” Update From Teacher Rebecca Main: Here’s More on What’s Been Helping More Students Say “NO!” to Vaping. It Works! It’s RE@L!

The 2020-2021 school year may forever be noted with a proverbial asterisk attached to it. One thing, however, stands clear as the dust settles on what has been a challenging yet invigorating school year, our teachers remain the steady constant for our communities, our families, and — most importantly — our students. At RE@L, we put all of our products through the rigors of the classroom before we make them available in the marketplace. RE@L’s learning product: 1 Up On Vaping™ has withstood the critical test of the classroom with solid, constructive reviews from educators who have used the tool in a REAL school setting with REAL students.

Recently, the team at RE@L re-connected with two middle school teachers we interviewed last year before the pandemic. One of those teachers, Rebecca Main (RM), shares her 1Up On Vaping™ experience with RE@L’s Consultant, Tacy Mangan (TM):

“I’d say for the most part it’s been pretty smooth. In the beginning, it was all online and everything we did meant students were either zooming or meeting with us online.”

RM: In general, as a teacher, since we were already an online school, it comes in handy to already know all of the basics of how to teach online.  I’d say for the most part, it’s been pretty smooth. In the beginning, it was all online and everything we did meant students were either Zooming or meeting with us online. It switched later in the fall, where we could have students come into school to use the study center. But we never actually went into the classrooms because of CoVID, of course. Then it switched even one more time to a different option, where we had about half of our students online and the other half of the students for in-person learning. So, at any given point, I was actually teaching in tandem. That was interesting! It is a fair amount of work and the long and short of all of that is I could be physically doing a workout with students while actually appearing in person with other students online, doing two things at the same time!

My favorite was teaching elementary students, half online and half in person. I had to have my cell phone as a secondary device on a “selfie stick.” I would click into the zoom as myself. I go outside with the selfie stick and show the students at home live videos that I’ve recorded in the past of me doing workouts so that I can be working with the kids out in the field. So, I was working with two different groups at the same time.

TM: Wow, that’s a very different way to teach! RM: It’s challenging! Having so many devices going at once, ‘splits our brain a little’. (RE@L adds, “In a good way, of course!”) TM: You still had a general idea of what was going on in your student’s lives. What have you observed about student vaping in the last year? RM: When I’m talking to the students specifically about the content and asking if they’re seeing a lot of vaping, it’s a little bit different because they’re not necessarily in class or in school as much. It really depends on their use at home. If they are at home, I would assume that there’s actually a little more engagement happening, because their parents are noticing what they’re doing. But then again, maybe not, because they might be doing their own work in a separate room, alone. In that case, then it might actually even be easier for a student to sneak away, have their door closed while the teacher or parent assumes they’re on task and doing the right thing.

TM: Let’s talk about 1Up On Vaping, which you’ve been presenting to students now for two years. Tell us how us things went during this last school year.

“They were all very excited about it.”

RM: When I started teaching this curriculum this past April, we then had two different terms. So, I split up the program. I taught it the final week of one of the terms and the starting week of another term. Almost all of our middle school got the information within a two-week span. They had done some pre-learning on the basics of tobacco use. I presented that content and then introduced RE@L’s “1Up On Vaping” as their reward for doing so well on their assignments. They were all very excited about it. Most of the time I was showing it to them on Zoom. However, if they were finding that their digital device wasn’t showing the picture clearly or it was lagging because of an Internet issue, they still had the link on our website to do the work on the chapter for the day and then continue on. TM: So, how did you gauge responses from the students, especially given your class room discussion in the past had been so helpful? RM: Actually, I had three ways I could do that!

“It made discussion far more productive.”

TM: So, what were the responses you got from the students? RM: I presented 1Up On Vaping to my fifth grade, sixth grade and seventh grade. Unfortunately I didn’t get to eighth grade this year due to a scheduling conflict.

TM: So, what did your students like most about 1Up On Vaping?

RM: They love the graphics. They love the storyline, and they really love the content. TM: Did 1Up On Vaping come across as “current” to you? RM: Yes, the information provided in 1Up is clearly up-to-date. The fact that we talk about the terminology such as  e-cigarette versus vaping. It’s helpful that we say “vaping” because most students, if you say the word e-cigarette, they don’t even register. The other piece that seemed pretty current was the fact that the content is told as an adventure story, a picture story. Students really appreciated the extra 1Up online games since they provided more  information, and also gave students time to check their findings. They really liked that. TM: Did you find any differences this year in your use? 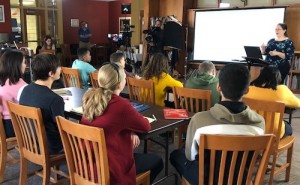 RM: I’d say the biggest difference for me was the questions I gave them. That process really keyed into whether they were getting the understanding of the content or not. In the past, it was more like, “Let’s discuss and, talk, talk, talk!” But now, when I get their answers, I know from discussions whether they truly understood the material or not.

“…the information provided in 1Up is clearly up-to-date.”

TM: Here’s the question many teachers ask: “Do you prefer teaching 1Up On Vaping live in the classroom or virtually? RM: It really depends on the class perspective. When it comes to my fifth graders, they respond and have all those “popcorn” quick answers. But my sixth graders are better at putting things in the chat because they want to be anonymous. The older they are, the more likely they will talk about functionality versus content. They know more about what’s going on in general. Still, both ways of presenting to students have their benefits if suited to the student’s needs.

TM: Do you plan to continue to present 1Up On Vaping to your students this coming school year 2021-22? RM: Yes, I have it already set as one of the units that we will do. I sometimes present it in the context, “OK! Now you’ve learned all of the boring stuff, so now we get to have some fun.” I’ll probably introduce 1Up in fifth grade and then again seventh grade. Reinforcement helps! TM:  Are you seeing any other kinds of vaping related curriculum or materials coming your way? If so how would you compare them to RE@L’s 1UP On Vaping?(Click on the graphic for more information on RE@L’s 1Up On Vaping features).

“I don’t think there’s any other program that’s as inclusive as 1Up On Vaping, and has all of the pieces, presented in a fun format.”

RM: That’s a really good question. The online formats and chats that I take part in as a health teacher will get that question. Other Health Teachers will say they are looking for a video or have a resource like a TED talk where they talk about the issue. But that doesn’t really get into vaping issues in detail. Most of the time it’s “watch this video, pause for questions at such and such, time-stamp it, and answer the teacher’s Google document questions. In closing: ”I don’t think there’s any other program that’s as inclusive as 1Up On Vaping, has all of the pieces, and is presented in a fun learning format.”

THANK YOU, REBECCA MAIN FOR YOUR MANY HELPFUL INSIGHTS ON USING 1UP ON VAPING™!

NOT ONLY IS 1UP ON VAPING™ TEACHER-TESTED. IT IS STUDENT-TESTED AS WELL. WATCH FOR OUR JUNE 6 BLOG POST WHICH WILL FOCUS  ON STUDENTS AND THEIR FIRST-HAND, CANDID THOUGHTS ABOUT THEIR EXPERIENCES WITH 1UP ON VAPING™.